We were recently invited by the JW Marriott team, to witness the world renowned pizza acrobat, Pasqualino Barbasso.

Pasqualino is on a mission to make high quality Italian pizza and to do it in the most entertaining way. This close to 40 year-old pizzaiolo is among the most skillful masters of acrobatic pizza-making and has travelled around the world offering his awesome performances and some lip-smacking pizzas made according to true Italian traditions.

The evening started with some light Italian nibbles and chilled beer, while some bloggers and we waited for ‘the man’, to showcase his world famous talent.

And in no times, the fun performance by Pasqualino began. Not surprisingly, everyone went ‘WOAH’.

Here is the glimpse of the performance: Pasqualino Barbasso

This was followed with pizzas, some more pizzas and a lot more pizzas by the man himself. The highlight was the walnut pizza, smoked salmon pizza and the pizza with palak paneer (An Indian dish made of ground spinach leaves, cottage cheese cubes and spices). These are the pizzas that one must try when you meet this entertaining pizzaiolo. 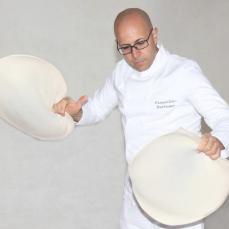 Pasqualino Barbasso is spreading this Italian awesomeness at JW Marriott, Mumbai since 9th May, 2014 and is here till tomorrow 17th May, 2014. Buon appetite!

FYI: In 1998 Pasqualino Barbasso won the Sicily’s Acrobatic Pizza championship. By 2001 he was World Champion, a title that he won in 2002 for a second time. Since then he has made dozens of appearances in Italian restaurants and pizzerias around the world.

One thought on “A Fun Evening With The Famous Pizza Acrobat, Pasqualino Barbasso At J W Marriott, Mumbai”