I don’t watch horror movies. Never. 30 minutes into NH10 and I was scared I had unknowingly chosen a horror film, the paranormal horror that is. I hadn’t read anything about the movie to know any better. By interval, I was convinced. The movie is more horrific than one of those supernatural horror flicks. You see, one never knows whether to believe such tales but the gruesome parts of NH10 are infinitely more bone-chilling because you know every scenario is real. A macabre tale set in the heartlands of Haryana against the backdrop of honor killings, NH10 is not your average Bollywood film. Yes it has its fair share of flaws but the virtues of the movie outrun the flaws by a mile.

Meera Singh (Anushka Sharma) is a driven, marketing professional working in a Gurgaon MNC. Smart, independent, level-headed, Meera is your typical corporate diva. She has an idyllic marriage with Arjun Puri (Neil Bhoopalam), a gentleman with ‘connections’ in the Delhi Police. You realize pretty early on Arjun is the hot-headed one, thinking from his balls and not his brains. When Meera gets attacked by a bunch of goons while returning from a house party late at night, Neil suggests they get a licensed gun to ensure her safety. This gun pretty much charts the proverbial downfall of the couple. 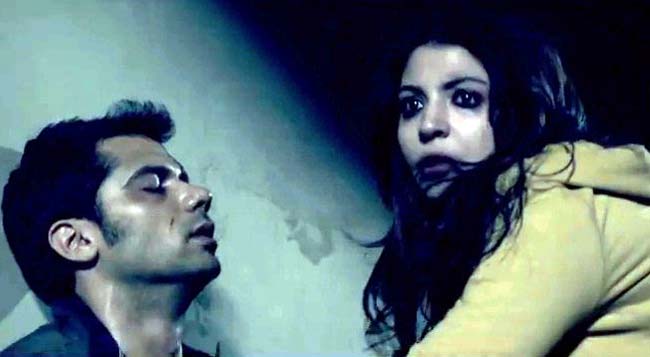 Arjun and Meera’s trip to a nearby NCR farm house for Meera’s birthday seems ominous from the moment they hit the NCR toll booth. And once they reach NH10, it is downhill all the way till the end.  When Arjun gets slapped trying to stop a couple getting hit by a bunch of local thugs, his male ego starts to do the talking, paving the way for the stupidest decision one can ever make. You know this sitting in the viewer’s seat and if you had your way, you would’ve stopped Arjun physically. Because you know exactly what is going to happen next. When Arjun’s stupidity leads to him and Meera witnessing an honor killing, their idyllic world comes crashing down.

NH10 works because post interval, when Anushka Sharma takes matters into her own hands, the movie packs in enough punches to knock out a pugilist. By the time, the climax arrives, you are at the edge of your seat egging Meera on, wishing with every bone in your body, she obliterates this godforsaken patriarchal society. NH10 works because the casting is pitch perfect, the cinematography real, the editing taut and the performances dripping with just the right doze of histrionics.

There are no unnecessary songs, the background score is gripping, with each song fitting the mood of the scene like a hand in a glove. Sure there are flaws, the prime one being Arjun’s stupidity, which acts as the match to the forrest fire. Sure the movie is predictable, you almost pre-empt the shit that is sort of about to go down. I’m told this movie is inspired from Eden Lake. I haven’t seen that movie yet. Keeping comparisons aside, NH10 worked for me because sometimes, as the climax shows, you gotta do what you gotta do and Meera with her heart of steel, accomplished the job like a boss.

P.S. – Why on Earth did Anushka Sharma tamper with her lips? In so many scenes, she actually resembled The Joker. Sigh. A bloody brilliant performance nonetheless with superb display of her acting chops. NH10 belongs entirely to her.