I was recently invited to a special screening of ‘Hope Aur Hum’ as part of Jio MAMI’s Year Round Programme. After a hectic and a long day at work, and seeing the trailer of the film, I convinced myself and decided to take the trip from Lower Parel to Juhu for the screening. Did I regret my decision? Read on.

‘Hope Aur Hum’ is a slice-of-life film that revolves around the drama of a classic Indian family, based on a real-life story by debutant director Sudip Bandyopadhyay, an ad filmmaker. This is a story that would resonate with every Indian family. In fact, the film and its characters are drawn from his own life experiences. He was quote in a leading mainline newspaper saying, “I was studying in Kolkata when I first met an old uncle who used to operate a box camera machine that used to enlarge copies in a most intensive and unusual mechanical process. This old uncle and his little stories inspired Naseer saab’s character in the film. People will like the sweetness and simplicity of my film.”

The film has an incredible cast featuring Naseeruddin Shah, Sonali Kulkarni, Kabir Sajid, Naveen Kasturia and Aamir Bashir, who are all an equal backbone of the film. It is also interesting to note that Music director Rupert Fernandes and Director Sudip Bandyopadhyay wanted to try something very different for the film, and so they decided to create the entire background and song score with one instrument – a guitar.

Set in present day, suburban city, ‘Hope Aur Hum’ is a simple, human story of a family. Nagesh (Naseerudin Shah) clings on to his youth with a space-consuming out-of-order photocopy machine – . Once a state-of-the-art fine German engineering product, the machine now frequently visits the state of being ‘out of order’. Nagesh claims to earn a living from it, but to anyone sane, it is obvious that he is just hoarding, calling it a memory. Everyone laughs at him, his family pesters him to get rid of it, but he wouldn’t budge. Incidentally, the machine also raises space and room issues for his granddaughter Tanu.

Nagesh’s younger son Nitin (Naveen Kasturia) lives a comparatively lavish life in the city of gold aka Dubai and has a penchant for showing up uninformed. He finds a love interest under surprising consequences in a twist that is absolutely hilarious and leaves him sincerely baffled. 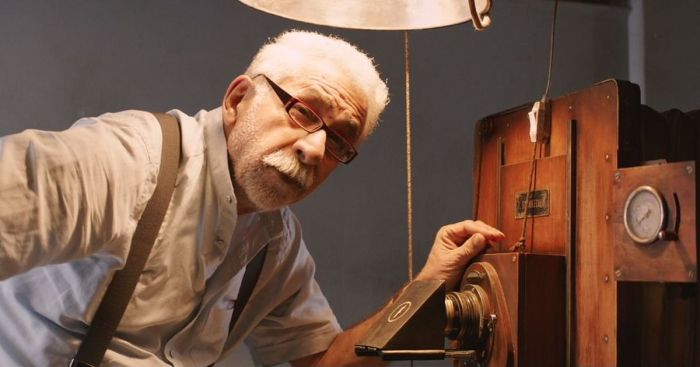 Simultaneously, Anurag (Kabir Sajid), Nagesh’s grandson, a jovial and active kid who loves to play cricket is forced by destiny to visit his grandmother’s house that is far from the city. There, he encounters an interesting series of events that he is rather secretive about. As things go topsy-turvy for him, his experience turns traumatic and his general behavior shifts dimensions. He loses interest in everything, including his favorite game, cricket. While this change in Anurag doesn’t go unnoticed by the family, the secret doesn’t see the light either.

As the three different generations with three different journeys struggle to find peace within, the story progresses to reveal how each member of the family responds to change and how hope brightens up their ‘hum’.

All in all, Hope Aur Hum has the perfect ingredients of a Sweet and Simple Family Entertainer – incredible star cast, story that will resonate with everyone and a lot of laughter. I’m going with a 3.5/% stars for ‘Hope Aur Hum’.

‘Hope Aur Hum’, presented by Thumbnail Pictures and produced by Samira Bandyopadhyay, releases on May 11.